In the Beginning it was just us...

Larry and Bobbie Merritt purchased the shop on September 1, 1979. The Cake Box, as it was known then, was a very small cake shop selling only birthday cakes and wedding cakes. The shop was only 450 sq. feet, with room for only one 4 ft. showcase and no seating. It was located immediately across the street from where Merritt’s Midtown Bakery stands today. It had very little business the first few months and of course, no employees except the Merritt’s. The Merritt family consisted of Larry, Bobbie and three small children, Christian 5, Earon 3, and Michael 6 months. Because there was so very little business, there was time to paint and spruce up the front of the shop. Carpet remnants and closeout wallpaper made the little shop bright and cheery, and every customer that came in or called was handled with the utmost of care. Only Bobbie and Larry understood how important they were to that day’s success. The idea of being more than just a cake shop was born out of necessity, not some grand plan for expansion. During the winter of the first year to supplement their income Larry begun making baked cinnamon rolls, brownies, and a few cookies. This is the money that they bought groceries with and the cake money went to pay the bills. Fear of failure and a young family is a great motivator! The good thing about having no employees or money is that you get to do everything yourself. What better way to improve your skills? With every new idea or product that was added to the product line they had to go out and learn how to do it.

November 1980 -- The Merritt’s were given the opportunity to purchase Mom’s Daylight Donuts, a typical 70’s donut shop, dark and dreary, but with more space and some loyal customer following. They purchased it, moved their tiny cake shop around the corner, and began learning how to make donuts. Bobbie and Larry immediately started to work on the new bakery, painting, cleaning, wallpapering, and trying to give it that now familiar look. They bought 4 used showcases for $10.00 a piece and painted the existing ones. All of this made the new shop look special, at least to them. With the move came the need to hire a couple of employees. It also started a transition in the name of the bakery, first to Merritt's Cake Box, and then finally to just Merritt's Bakery. Over these years we added many products, and tried to get to know every customer as we could now sit with them and have coffee!

The next thirteen years were spent in this location, with several attempts at adding other outlets, wholesale business, and more space and equipment. These were very hard but fruitful years of growth, both with the family as well as the business. They more than doubled the physical size of the building to 2400 sq. ft, sales were more than 13 times the first year and there were now more than 20 employees. Bobbie’s cake decorating skills, which were so evident from the beginning, fueled all of the growth in sales as well as reputation.

Late in the 80s, the Merritt's had an opportunity to take over a failing bread bakery on South Lewis. Formerly, the Bagelry, the new Lewis location of Merritt's Bakery was a new approach with a smaller front end, but a giant kitchen where they expanded their offerings again. It was a great experience and many of the pieces of equipment we acquired there we still use today! If you were a customer there, thank you so much for your business, but that location was not to be. Two years after it opened as Merritt's Bakery, the city decided to expand Lewis Avenue cutting off the primary access to the shopping center. It was not long before the location had to be closed. 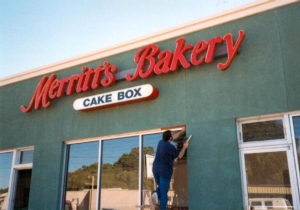 After closing the Lewis location the Merritt’s began remodeling their current Midtown location. It had been a very rowdy bar and took a tremendous amount of remodeling time and money. December 1, 1993 was opening day of the new location. This new bakery was the realization of many ideas, dreams, hopes, and prayers. Since opening this bakery sales have grown, employees have increased in numbers, reputation and quality have increased, and the family continues to grow. This location has proven to be the springboard to many opportunities and growth for everyone that has worked here.