We have accomplished a great deal, but it took many steps to get there...

The next decade saw us rebuilding ourselves by focusing on what we do best. We spent many hours training staff and ourselves. We pushed really hard to turn out lots of work. Every holiday we tried to have as much as we could possibly sell available each morning, and always to have a new idea or two just for a surprise! This meant crazy hours for us and our staff as well as a "gotta get it done" attitude that was sometimes hard, but did separate out those who really wanted to do this kind of work from those who didn't. Slowly, but surely, we climbed back up the hill and by the end of the 1990s were ready again to expand to other parts of Tulsa. 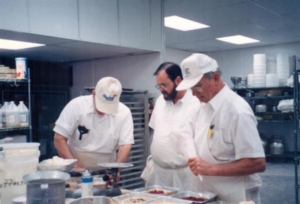 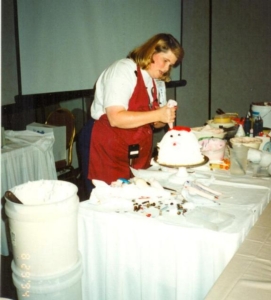 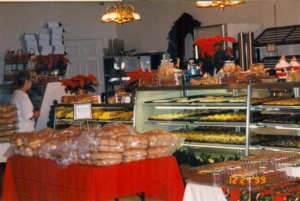 January 2001 -- Larry Merritt receives his Master Baker Certification. This certification is made by the Retail Baker's Association of America and is the highest level of a three level certification. Requiring both a written and practical test covering two days of rigorous scratch baking, pop formulas and strict product evaluations, the certification is a formidable examination of a baker's knowledge. It is so tough of a test that few pass on their first try or achieve high marks when they do finally pass, Larry did both becoming CMB #110. Having taught himself how to bake out of necessity with no formal training, his achieving the Master Baker Level of certification was a wonderful endorsement of the quality of baking Tulsan's had come to enjoy from Merritt's.

March 15, 2001 -- The Merritt's have long wanted to better service South Tulsa, and beginning in March of 2001 they made this a reality. Merritt's Bakery South is located at 71st & Garnett in the Kenosha Corner Shopping Center. This location features a full line of bakery products just like you have come to expect from Tulsa's Finest Bakery. With a staggering 7400 square feet of space, the South location has 23% more room than the Midtown location. With each bakery baking its own products, fresh baked cakes and pastries are now just around the corner no matter where you live in town.

October 2002 - Larry Merritt becomes the 2003 President of The Retail Bakery Association. This honor is the culmination of over ten years of RBA involvement and service. RBA was originally organized in 1918, and represents retail bakers from all fifty states as well as Puerto Rico. RBA exists to assist small retail bakeries in growing their business through combined knowledge while keeping larger bakeries fresh and innovating with new ideas. Having benefited incalculably from years of RBA & GSWRBA membership, Larry believes in passing on his hard won knowledge to new bakers just starting out. He is the first person in Oklahoma to ever be President of RBA. 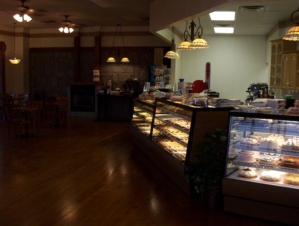 April 2004 - Merritt's Bakery opens their Owasso location on 86th St. N. and 124th E. Ave. In an effort to provide the community that was growing in Owasso with the baked products they had come to expect in Tulsa, the Merritt family opened a 2100 sq. ft. store in late April.  A new concept size in Merritt's bakeries, the Owasso location can seat approximately 30 folks for breakfast, lunch, or even a late afternoon snack. While we closed the Owasso store due to lack of consistent sales in 2011, it was a wonderful experiment that taught us a lot about our product line and profitability!

October 2007 - With the expansion of the last fifteen years, we had just out grown our buildings and had to consider moving or finding another solution to our space problems. Our solution was to pull just the kitchen out of each bakery and open one big kitchen around the corner from the Midtown location in which to bake, fry, and decorate everything. This location came to be known as Fort Merritt and is where we now base our operations.

On to Today at Merritt's...